Add Your Own Tweets, Answer Back, Join In:

But don't just sit there and listen to Paxman and Co and their guests, join in, show or tweet your message:

Type your message in the box at the top of the screen and hit the "enter" key or click "Show". Your message will fly in and surround one of the presenters: 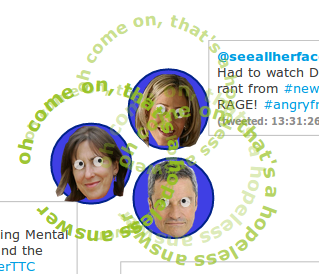 Tweets are pulled in every fifteen minutes or so, not all #newsnight tweets are used, just a small sample.