Tweets containing the various phrases that Father Jack used to shout periodically appear around the screen accompanied by Father Jack shouting out whatever phrase is used in that tweet (so have your sound turned up). At the same time the phrase he's just shouted out zips away from Father Jack to the edge of the screen and fades away.

But Don't Just Sit There, Join In:

You can show your own message on-screen or tweet your message to your followers:

Type your own message in the box at the top of the screen and hit the "enter" key or click "Show". Your message will fly out from Father Jack to the edge of the screen; if it includes one his phrases you'll also hear it. 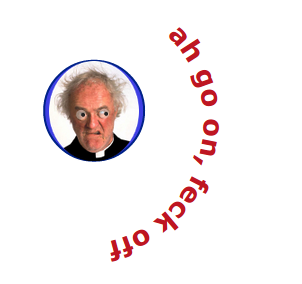 Tweets are pulled in every fifteen minutes or so, not all Father Jack type tweets are used, just a small sample.